Can a power shower be used with a wetroom?

Pumped or power showers are also becoming more popular and our wetroom systems are designed to cope with all the strains of modern showering systems.

Can you only have a wetroom downstairs?

With modern advances in wetroom technology and within the materials used wetrooms are now most commonly situated upstairs as part of a bathroom.

What are the advantages of a wetroom over a traditional shower enclosure?

Both systems have their good points. The principal benefits of a wetbase are :

What is a wetroom?

A wetroom in its extreme definition is a fully open room that is used for showering.
However the instances of an existing property having enough space for this type of wetroom is limited and so what is commonly known as a wetroom in the uk is actually a wet area within a room. 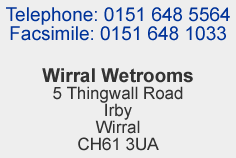